New affidavits filed in the Texas Supreme Court allege a massive illegal mail-ballot harvesting scheme is underway in Texas’ most populous county, and “elite” Democrat officials are leading the effort.

Harris County has received attention over the past several weeks for its  proposed plan to send mail-in ballot applications to all 2.37 million voters in the county regardless of eligibility, thereby inviting fraud and abuse into the process.

New testimony suggests that may only be the tip of the iceberg.

The first account comes from Charles Marler, a former investigative specialist with the Federal Bureau of Investigations and current private investigator.

In his affidavit, Marler alleges that several Democrat politicians in Houston are behind the illegal scheme:

“During my investigation, a core group of names continued to surface regarding the organization and operation of the voter fraud scheme. Witnesses have stated to me that Precinct 1 Harris County Commissioner Rodney Ellis and District 13 Texas State Senator Borris Miles are leading the illegal ballot harvesting operation in Harris County, Texas. Their chief lieutenants are Houston businessman Gerald Womack and political consultant Dallas Jones who work directly under them in executing the ballot harvesting operation in Harris County, Texas.”

Dallas Jones has notably been hired by Joe Biden’s presidential campaign as the Texas political director.

“Witnesses have shown me and described to me how the ballot harvesters take absentee ballots from the elderly in nursing homes, from the homeless, and from unsuspecting residences’ mailboxes. The ballot harvesters then complete the ballots for their preferred candidate and forge the signature of the “voter.” Two witnesses stated to me that there are two individuals employed at the Harris County Clerk’s Office who are aware of the illegal ballots and help facilitate and mask the processing of the ballots into the legal stream of ballots.”

Marler also alleges that former Harris County Clerk Diane Trautman, who resigned earlier this year citing “personal health concerns,” did so because she was concerned she “would be included in the eventual arrest pertaining to illegal ballot harvesting.”

A second affidavit by Mark Aguirre, a retired captain with the Houston Police Department who is also now a private investigator, corroborated Marler’s accusations. Aguirre also claims he has proof:

“I have in my possession video-taped interviews of witnesses attesting to the aforementioned people having groups of people completing thousands of absentee and mail-in ballots, including completing ballots for deceased individuals; illegally going into nursing homes, with the complicity of the nursing home staff, and filling out and forging the signatures of nursing home residents; signing up homeless individuals to vote using the ballot harvester’s address then completing the ballot and forging the homeless individual’s signature.

“This entire operation is being run by the elite politicians of the Democrat Party in Houston/Harris County.”

While law enforcement agencies are reportedly investigating these potential crimes, nothing will be done about it until “well after the November 3, 2020 election” the former FBI agent said.

Based on interviews, review of documents, and other information, Aguirre identified three individuals, including a state senator and the Harris County Commissioner, who are working with Jones on the ballot harvesting operation: “District 13 Texas State Senator Borris Miles, who is the handler of Mr. Jones, political consultant Gerald Womack, and Precinct 1 Harris County Commissioner Rodney Ellis.” Aguire added: “One of the companies these individuals are using as a front for this operation is AB Canvassing, although there are others that have been identified that we are investigating.”

Aguirre noted that the ballot harvesters have been exploiting the elderly with the complicity of nursing home staff.

The full affidavits are at the end of this article.

Citizen journalist Colleen Vera had previously discovered evidence of what appears to be a massive vote harvesting ring operating in the state of Texas involving mail-in voting and various Democrat political campaigns. 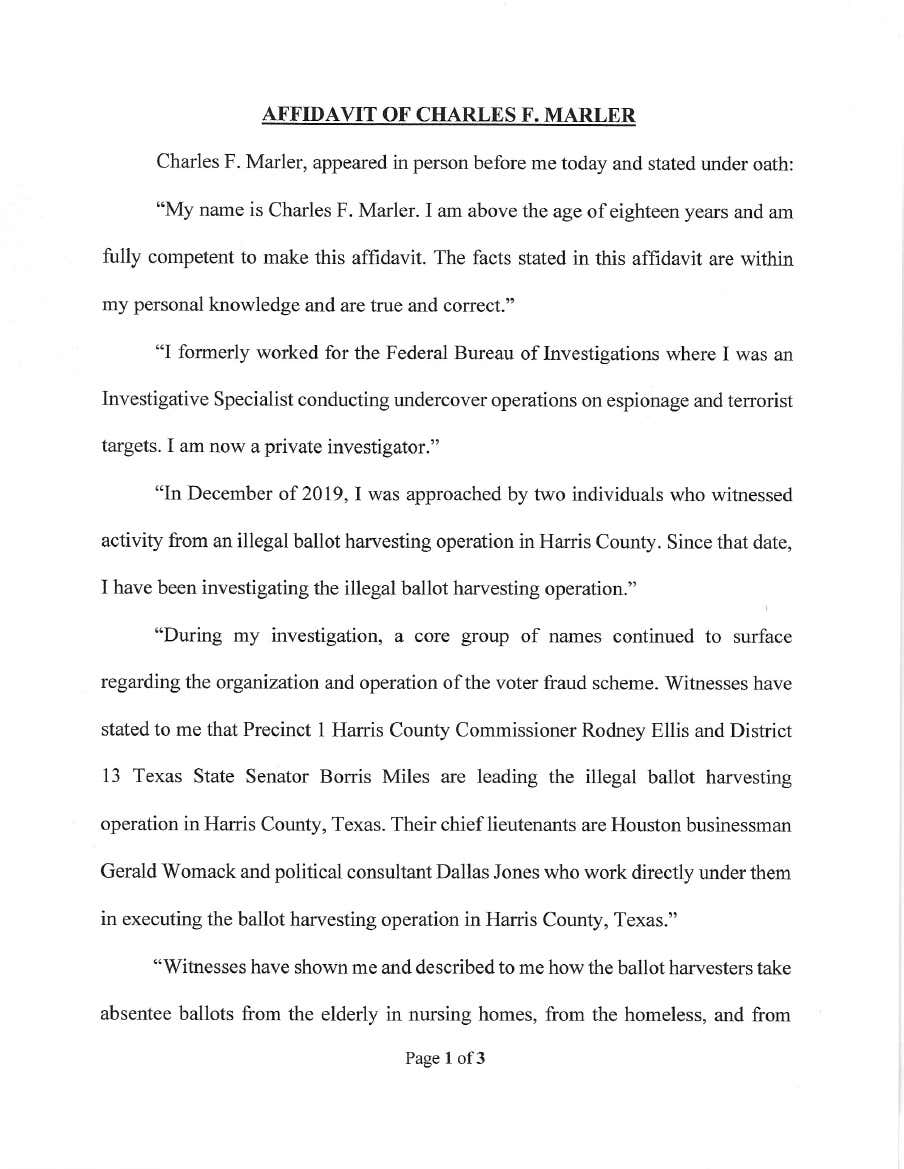 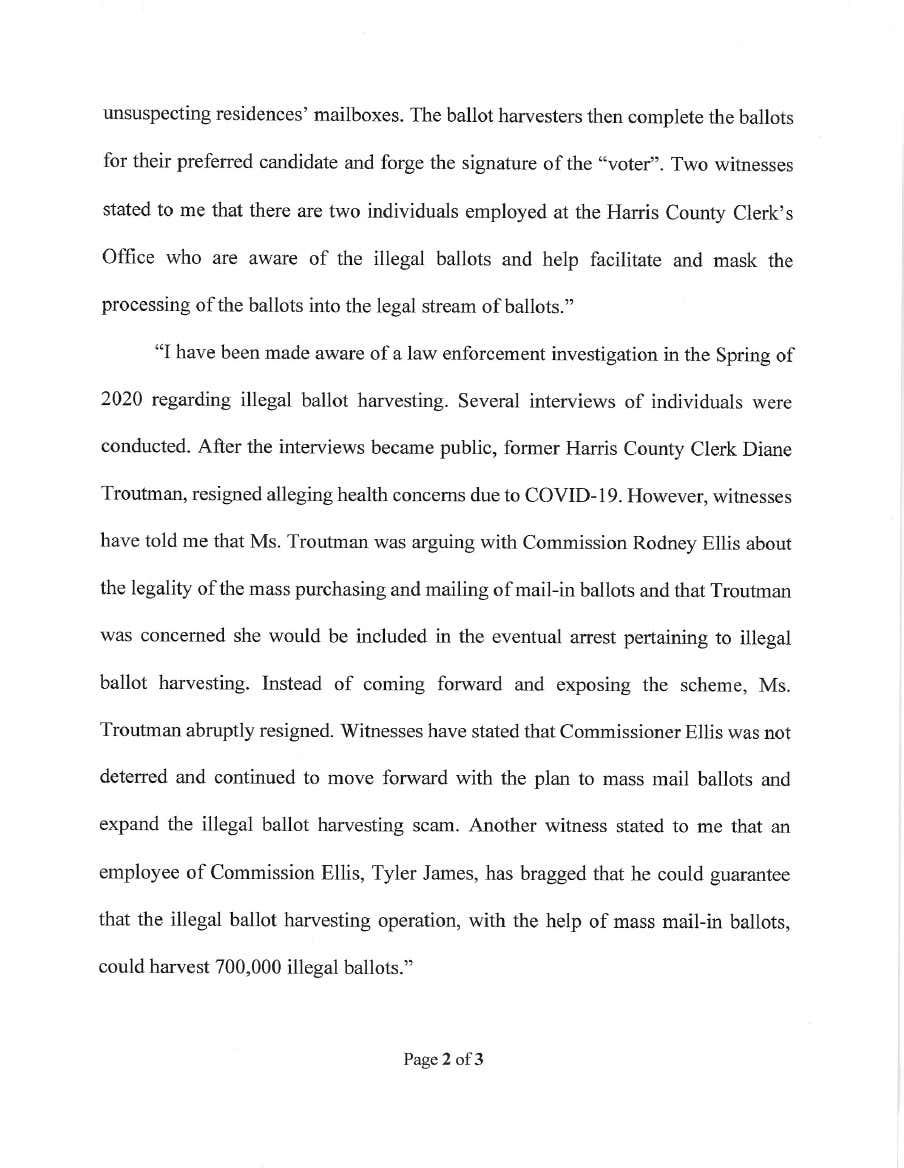 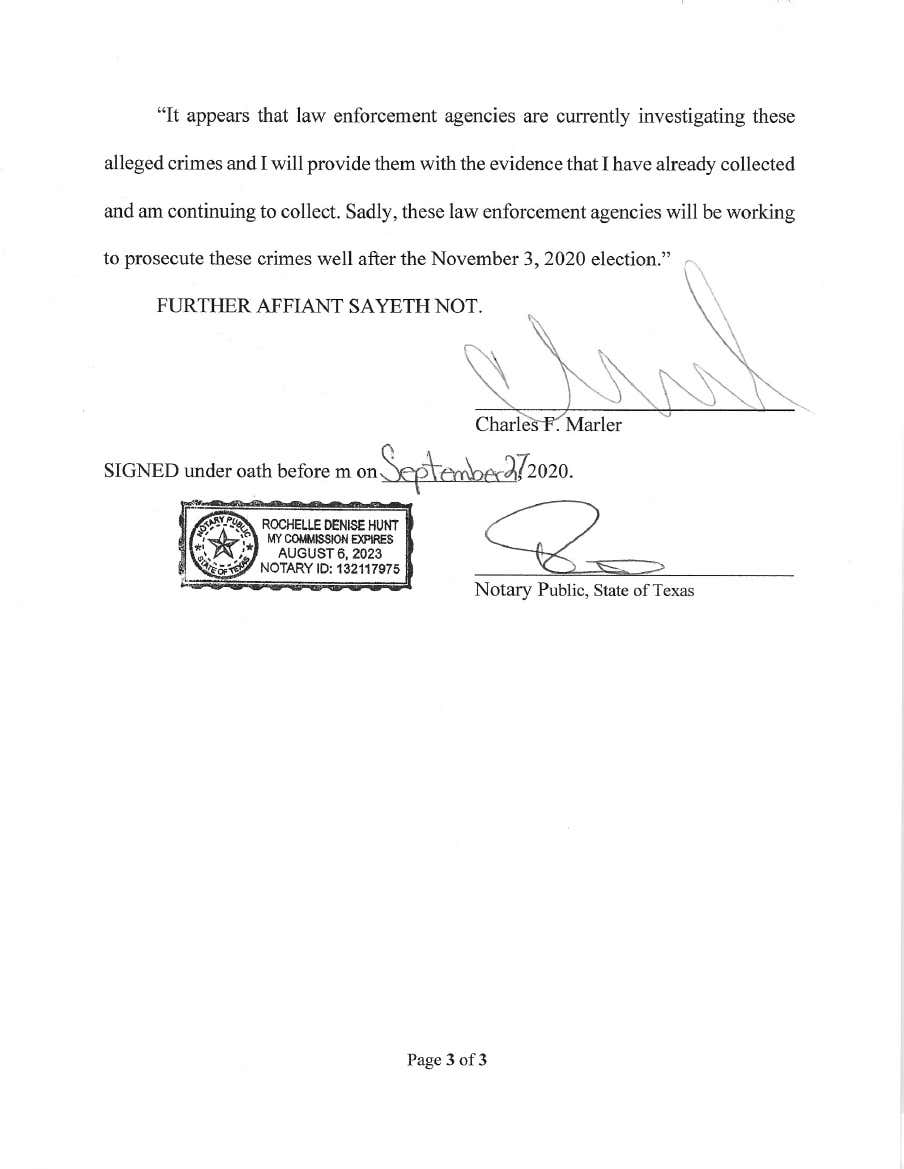 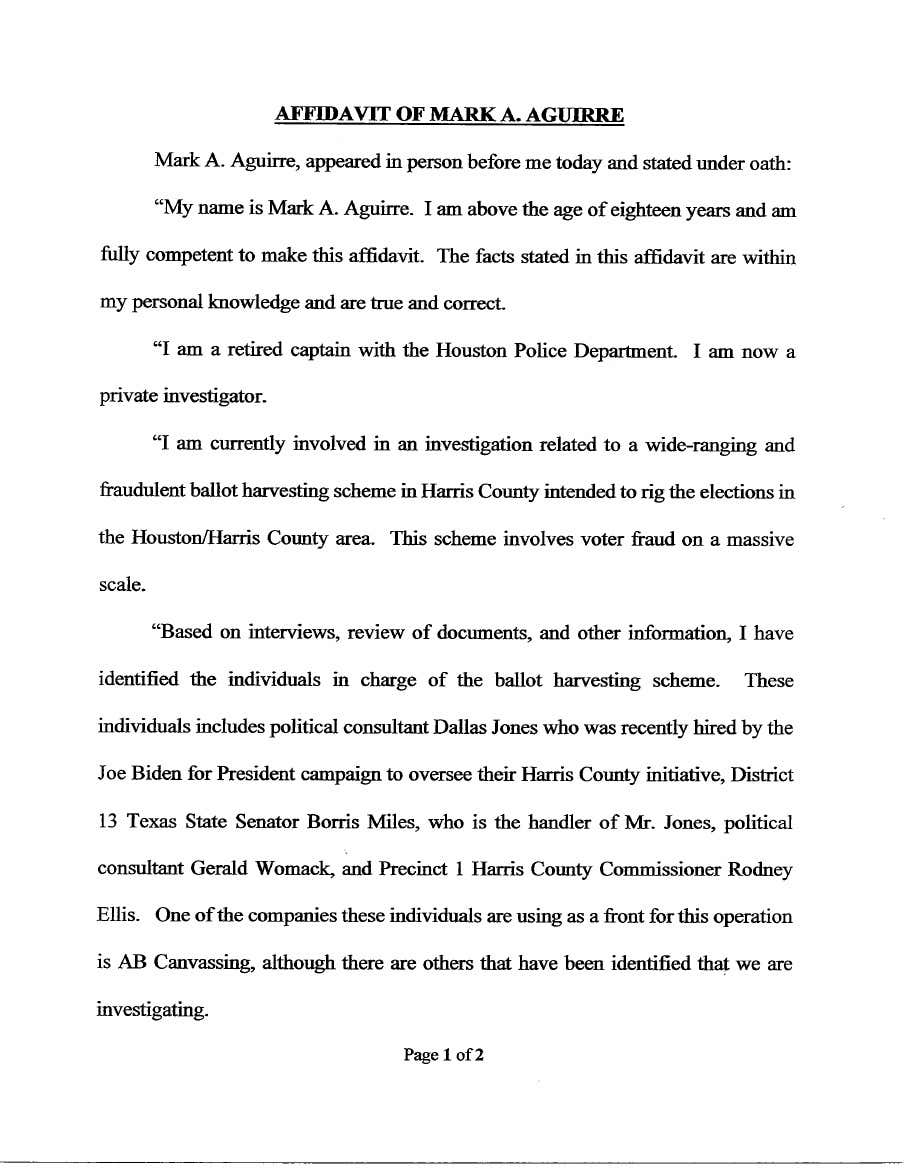 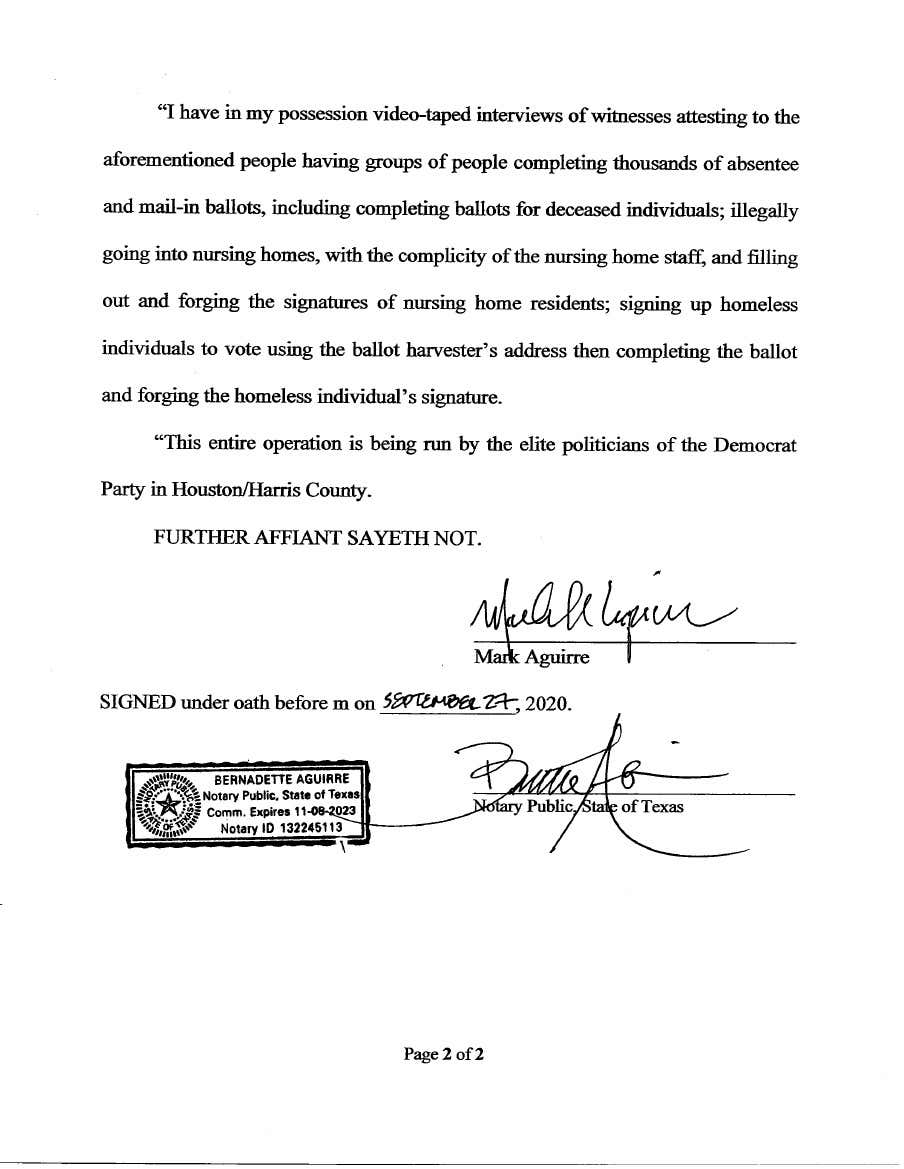