As many Conservatives have come to understand, liberal leftist lunatic such as Mitch Kahle knows no bounds. But more importantly, they never seem to know when it’s time to end their narrow-minded crusade.

In what rightfully started off as a call for justice in the murder of George Floyd, has now morphed into a quest to wipe away all history that Liberal Progressive Democrats deem offensive.

And that quest is never more glaring than in a Michigan Association of Civil Rights Activists, headed by a triggered leftist simpleton named Mitch Kahle.

Kahle and his Kool-Aid drinking liberal fanatics are now seeking to tear down a monument depicting a freed black child that honors the Emancipation Proclamation.

The statue features a Union Soldier, a Confederate soldier, and a small black child crouched between them, holding a sign that reads, “Freedom to Slaves!” 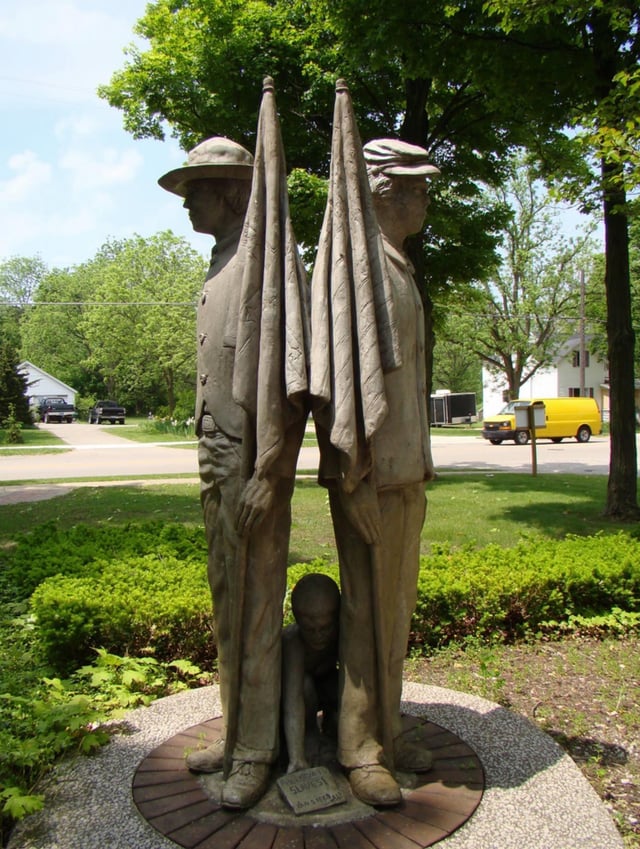 Mitch Kahle and his supposed “civil rights” group find the monument offensive and demand its removal.

“We have an American soldier for the union, we have a confederate soldier who was the enemy of America, they were traitors, and now we have this depiction of a slave child,”

“It’s highly inappropriate and the township of Allendale should remove the offending material and leave the memorial for true veterans, actual veterans of the United States,”

Unfortunately, Kahle can’t see anything past his own wokeness. If he did he would see that this statue doesn’t praise the Union, the Confederacy, or the Civil War.

This statue is a somber reminder of a very dark time, when ending slavery caused a nation to be torn and divided, and pitted brother against brother.

Despite Kahle’s simpleminded beliefs, this statue doesn’t glorify the Confederacy like the leftist mob delusionally believe, in fact, it does the exact opposite.

Mitch Kahle embodies everything that personifies what a ‘Triggered Progressive’ is.

In 2015 Kahle moved to the conservative West Michigan area from Hawaii. Where he immediately pounced on “dozens” of institutions that he felt was doing something that triggered his precious sensibilities.

The Detroit News reported in 2015:

He [Kahle ] convinced Ottawa County to remove a religious sign from a county park, persuaded Grand Haven to turn a 48-foot cross on city land into an anchor, and got two school districts to stop a minister from continuing to hold lunchtime programs at schools.

Now Kahle has turned his ‘wokeness’ toward a concrete statue, that’s part of a collection honoring veterans from several U.S. wars and conflicts.

The more Conservative bend the knee in the belief that somehow giving in to the leftist liberal logic will be appeased them, are as delusional as Mitch Kahle is.

As history has proven, time and time again, you could never appease a Liberal Progressive Democrat.

Kahle and his ilk blame Religion, Republicans, and most of all America for all the world’s ills.

They equated all three with racism, child abuse, poverty and every other evil known to man.

In their small-minded delusional world, if they bring the end to all three. The world would magically transform into a paradise where flying Unicorns poop rainbows filling the air with peace, love, and tolerance for all.

Fox 17 asked Allendale Township leadership about whether they’ll remove the statue of the freed black child to appease the leftist agitator.

“This represents President Lincoln’s proclamation to free the slaves, something we should continue to celebrate today.

This statue does not glorify the confederacy. It is a record of a pivotal time in our nation’s history.”

Because we’ve seen this type of rhetoric from supposed strong Conservative leadership in the past. Only to ultimately watch just days later, they giving in to the leftist mobs demands.

Time will only tell if once again the right succumbs to small-minded mental midgets like Mitch Kahle.

Many on the left keep asking how could Conservatives so steadfastly support President Donald Trump?

The reason is simple.

Poll: Americans Blame Biden For Biggest Surge in Inflation Since 2008